The three quiet Karoo towns Touws River, De Doorns and Worcester form the final leg along the N1 into Cape Town. These towns have played host to a number of historically significant events and many tales stem from the 17th and 18th centuries that play into the foundations of South African history as we know it today.

The Hex River Valley marks the beginning or end of the Karoo (depending on which direction you are going) and serves as a great bastion of mountains, rivers and valleys astride the three towns

While the significance of these towns is often lost in modern-day life the folk tales and history of the region is fascinating.

Hex River Valley is named after the Dutch/Afrikaans word for “witch” or “Hex”. The origin of this name is based on a story that dates to 1768 when the valley was in its very early Dutch  / French Huguenot settlement days and centres around the Matroosberg Mountain (the pinnacle of the Hex Valley range). The valley stretches from SW to NE. It’s 25km long and only 4km wide at its widest point and to the north and the Kwadouw Mountain Range create a spectacular and rugged landscape. The Matroosberg (at 2230 metres) is the highest point in the Hex River Mountain Range. Its name translates to “Sailor Mountain” because of the rock formation on the skyline that resembles a small boat with a sailor standing at the stern.

The Legend of Eliza Meiring

Our beautiful witch of the Hex River Valley is perhaps one of the most poignant stories of the regions colonisation history.

Eliza Meiring was a charming Dutch girl that was said to be “exceptionally beautiful, of noble blood and, finely bred” lived in the manor house on Buffelskraal Farm, northeast of De Doorns.

Eliza was a renowned beauty of her time and attracted a great deal of male interest in the area. Known for her sense of humour wherein she would dissuade many male suitors by promising to marry whoever earned her attention by bringing her a rare “red flower” (probably a Disa orchid) from the neighbouring Matroosberg Mountains.

This is no small feat given that the Matroosberg mountain range towers at 2,247 m above sea level and is one of the highest mountain ranges in the Western Cape.

Eventually, after toying with many suitors, Eliza fell in love with a man by the name of Phillip who had been wooing her and finally captured her attention and heart. One day, without her knowledge Phillip wanted to surprise Eliza by climbing the Matroosberg to bring her a rare orchid from its peak.

As the legend goes,

Somewhere high in the Matroosberg, Philip was taking a rest from his climb when he noticed the coveted red flower in the cracks of the rocks below him. When Phillip lent forward to pick the flower and lost his footing and fell to his death.

Philip’s body was later discovered by a local herdsman and reported back to the family.

Devastated with guilt and grief following Phillips death, Eliza eventually went mad. Her family had no idea what to do to console her and eventually resorted to confining her in an upper room at the manor house. According to legend, Eliza tried to escape from the room aided only by the moonlight and fell headfirst from a high window ledge to her demise.

This legendary tale passed as a spoken story that was recounted for generations of early French Huguenots and Dutch pioneers that visited the area with the moral of the story being a lesson in vanity.

As with many spoken stories, there are a few endings depending on who was telling the tale. Some say she escaped the confines of her room only to slip on the same rock where Philip had fallen and other accounts were that she jumped off the rock to end her misery.

What seems quite constant in both French and Dutch accounts is that “Eliza’s” spirit is said to still wander the Matroosberg mountain slopes under the full moon, apparently looking for her lost love. It is said that inhabitants could hear the mournful cries of Eliza Meiring’s ghost echoing through the Hex River Valley up to peaks of the Matroosberg.

So be on the lookout. 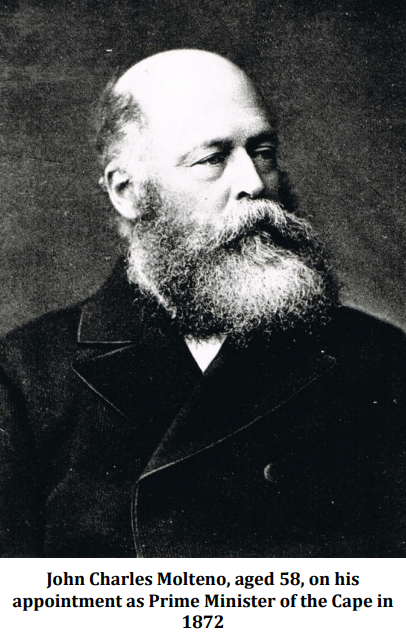 With the discovery of South Africa’s diamond resources in 1867, the world’s demand for diamonds began to change the course of the Cape Colony forever. A once rare mineral was suddenly becoming fashionable, desirable and accessible to the wealthy in the west and the global demand for diamonds ramped up more than tenfold in the decade to follow.

In 1871, the discovery of an 83.50-carat diamond on the Vooruitzigt farm (now known as Kimberly) sparked what we know today as the “New Rush” or the “Diamond Rush” in South Africa.

The then industrious Cape Prime Minister Sir John Charles Molteno also known as The “Lion of Beaufort” saw the opportunity to buy a number of farms including De Doorns Farm in 1875 and establish a railway station in the colonies expansion towards the high plateaus of the Great Karoo.

With Kimberly fast becoming a new epicentre of global diamond demand the Cape Government Railway engineers were charged with the task of finding a viable route to link Worcester through the Hex River Valley and into South Africa’s interior. In an interesting account, the prime minister asked for a map of South Africa to be brought to him. He then took a ruler and drew a straight line from Cape Town to the Karoo town of Beaufort West. “But,” exclaimed the engineer, “that means you go slap bang through the Hex River Mountains.” “Never mind,” Molteno replied, “that is the way I want it to go.”

In the 1800’s the journey upcountry in South Africa was an incredible undertaking that was fraught with danger and largely undertaken by ox-drawn wagons. The real problem in establishing straight line railway services was the terrain through the Hex and into the Karoo where the many streams, mountains and valleys forced ox-wagon routes to crisis cross through the range.

The renowned colonial Prime Minister bullishly commanded the project to go ahead and the seemingly impossible task of carving through the mountainous terrain began.

The rail project quickly began to run the Cape colony into deep debt. In order to pay off the vast sums incurred for the rail infrastructure, Molteno used income generated from diamonds and ostrich feathers (which were South Africa’s high demand exports of the era). Along with the roads and rails, Molteno is also attributed to constructing a modern telegraph, vast agriculture and massive irrigation systems in the region.

Hundreds of years later driving through Hex Valley we can only appreciate what it must have taken to literally move mountains and the substantial feats of Victorian engineers which are much the same routes through the Karoo today. Through De Doorns, the line reached Cape Town and Montagu Road (later Touws River) and the Towns essentially “grew up” around the stations.

By the 1880′s Kimberly mines were producing 95% of the world’s diamonds and the Prime Minister John Molteno’s railway line through the Hex River Mountains to the newly discovered diamond fields was an instrumental component to the export. When Jan Gerrit Bantjes found gold on the Witwatersrand in June 1886 the trans-Karoo rail development north into the country set the stage for South Africa’s gold rush that would drive the economy into the modern era.

Snow-capped mountains in winter make Hex Valley one of South Africa’s most iconic and picturesque valleys, especially in Autumn when the various vines produce a wonderful display of colours!

The town’s name comes from the 1725 farm “De Doorns boven aan de Hex Rivier”. The farm became the seat of the area’s own drosty in 1822. De Doorns has a rich cultural heritage filled with folk tales from the Huguenot, Dutch, British and Khoi inhabitants of the area.

Two farms were purchased to lay out a town. De Doorns was a Drostdy. (In historical contexts, a Magisterial and Administrative District over which a Landdrost had jurisdiction.)

These and nearby ranges bear witness to the valley’s earliest human inhabitants. The /Xam San, the Southern branch of the San tribe of hunter-gatherers, painted rock art on the cliffs and caves of the mountains 7 000 years ago.

The Great Karoo, covering over 400 000 square kilometres, was once an inland sea 250 million years ago. The water evaporated as the climate changed from cold to hot, leaving a swamp populated by reptiles and amphibians.

The kham or xam Bushmen, once common throughout the Cape Colony, had rich folklore. Notably collected but only partially published.
Few stories are about humans alone; most are about animals, heavenly bodies, or natural forces often associated with animals. Some of these stories are pure fables, with personified animals as heroes, behaving either according to their well-known character or to some standard of cunning, stupidity, etc. White Europeans were often characterised in these stories as animals too.

Latest News From The Farm

6 Incredible Facts About the Karoo